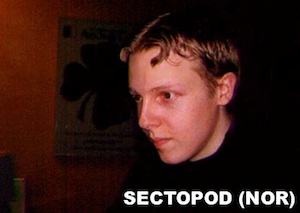 One of the best Quake players of his time.

Sectopod was one of the first players, if not the first, to use the RL-boosted Bunnyhop. He used the technique in a duel against Sujoy at True Gamers Invitational in april 1999, and this is considered to be the first display of the technique to a wider audience. Sectopod was trapped at mega health on DM4, with Sujoy standing by the grenade launcher, waiting to frag Sectopod when he came out. Sectopod did a more or less horizontal rocket jump against the wall behind the mega health and was able to use the speed by bunny hopping. Thus, he bunny hopped around the corner and was well across the lava bridge before Sujoy even managed to react.

«Another player of whom much was expected before the tournament was Sectopod, from Norway. Alongside Kane, he made Group B a very tough call for Nikodemus, Sujoy and Blitzer. On DM4 Sectopod was brilliant. He was well-known for his speed around the map by bunny-hopping and at one point achieved an amazing bunny-hop at the end of a rocket-jump in such a way as to maintain the speed of the rocket-jump. Everyone was talking about it. In person, Sectopod said very little, preferring to sit with his fellow Norwegian, Mastah-Killah and prepare for each game. He had a definite presence at the tournament, though, and seemed to have two distinct styles: black polar neck jumper and white polar neck jumper. The way Sectopod shrugged his shoulders (in slow motion) led Izn0 to coin the phrase «to Sectopose». An absolute class player and one of the undoubted stand-outs of the tournament, Sectopod came third behind Kane and Lakerman. Watch out for this player, he is one of the greats and if he keeps playing Quake (all variants) he will be holding aloft the crown one day.»

Sectopod's bunny hop against Sujoy on DM4 was so unexpected it spawned this conversation while they were still playing the duel:

Sujoy later commented: «I was thinking: Ah, finally got him trapped at mega! Time to do a bit of damage on his... oh shit where did he go?»