After the national team games were a hot topic again due to the Quakeworld Nations Cup this tournament was started. Since the common idea seemed to be that having 10v10 Death32c games was kind of outdated the format was changed to the regular game types of 1on1, 2on2 and 4on4. Every game contained three 1on1 games in which both nations had to field three different players, and both one 2on2 and 4on4 game.

The last four games of the completion had major delay, the admins put pressure on teams to play their games until the point there were four teams left. Basically this resulted in Russia taking a 5-0 win against The Netherlands who were forced to play on the only day Russia wanted to with the threat of WO. On this day for example

Reppie, the best dutch player, was not able to play. The two games Russia had to play in the week after this were played two and the second game five weeks later because they refused to play with anything else than their best team which wasn't available too often, while the admins did not take any further action. Even though the Russian team did a good job coming in third while losing in the first WB round it was kind of sad to see them delay the tournament as much as they did.

The Danish National Team wasn't quite happy with the match format, they won every single of their 2on2 and 4on4 games but still didn't manage to get further than a tied 7th place because they lost all three of their duels against Russia. In the next championship QWWC 2005, the format was changed to two 1on1, two 2on2 and one 4on4 game per match.

After the Swedish National Team beat the Finnish National Team in the winners bracket finals, the Finnish team struck back in the first BO5 match winning 3-0. Five days later though, the Swedes struck back with a team mainly consisting of Griffins Tappra Gossar members, this time winning 3-1 (unlike most other matches they only played until one of the teams won 3 maps, thus won the game game). 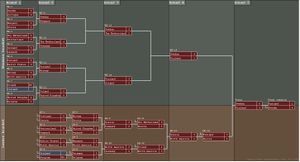