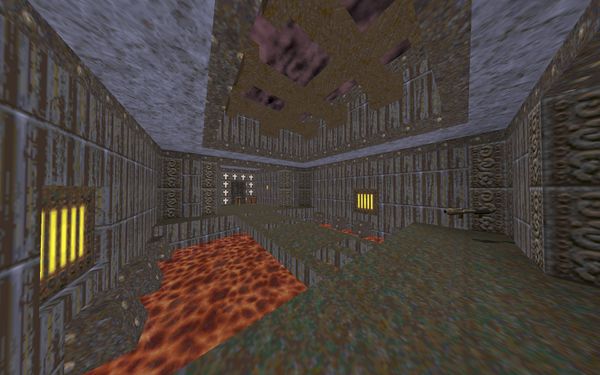 Death32c is a large deathmatch map that combines the three original Quake Deathmatch maps Dm2, Dm4 and Dm6. The map was created by id Software's own Christian "Disruptor" Antkow and released on 04-07-1997 to create a map where teams both with a size of up to 16 players would be able to fight it out. The map was part of the "Deathpack1u" collection along with Base32b.

Because these three maps are combined into one, each with cleverly designed pathways to link them together, it becomes possible for example to use a Lightning Gun in Dm2, use a Ring of Shadows in Dm4 and even collect two Quad Damage powerups to increase their duration. You can now also swim from the water in Dm2, which contains a Super Nail Gun, to the Dm4/Dm6 crossing.

Among Team Deathmatches there have also been plenty of Free For All's held on this map, such as the Kombat FFA tournament.

As you can see by the following screenshots the map has been played ever since its release date, where national teams would face each other with

Sweden in the finals.

Below you can watch an old video of

And in this video we can even see

John Romero himself playing the map.

Here you can see a few nice shortcuts between the maps.