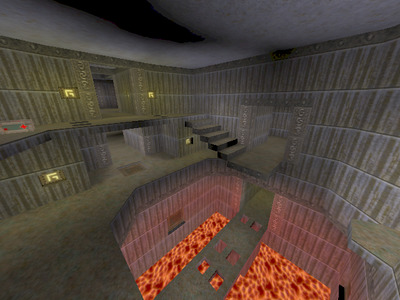 'The Bad Place' is the fourth deathmatch level of Quake. This level consists mainly of a large three floor Central Room where most of the weapons are found. This level has all of the weapons in the game. Most of the side rooms contain a teleporter, which allows for quick navigation around the map. However, due to the speed at which players can travel around the map, it is not ideal for larger groups.

Due to the this deterrent for larger groups, and the two Rocket Launchers at a reasonable distance from one another, this level is one of the most popular maps for 1on1. This also makes it popular with fast paced Deathmatch players that like to rush from one side of the map to the other. No matter the size, the map is rather brutal in combat, which is perhaps the rationale for its name.

Dm4 favors a fast paced approach, but can become slow paced (eg: QHlan 3 and 4 final). The slow pace is facilitated by a high tendency for spawn fragging due to three factors: the closeness of some spawn points to the Lightning Gun area; the overall small size of the map; and the existence of only one control point, with only one secure spawn spot in that control point.

This control point is the only Red Armor area on the map, and many otherwise close Dm4 matchups are decided by the quality of a player's 'Red Armor spawns'.

Dm4 places a lot of importance on rushing, aim, awareness, and controlling/attacking the Armor room. Most top Dm4 players are 'rushers'. Slow pace can also be forced by camping in the Mega Health room, but this is very risky and is usually only done to buy time, because this room has only one entrance/exit.