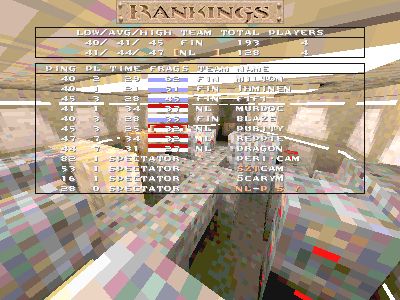 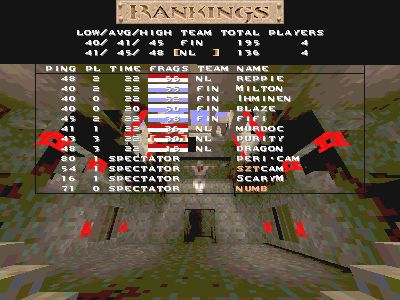 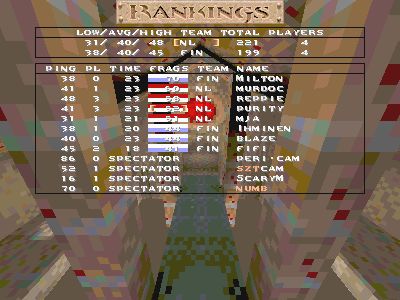 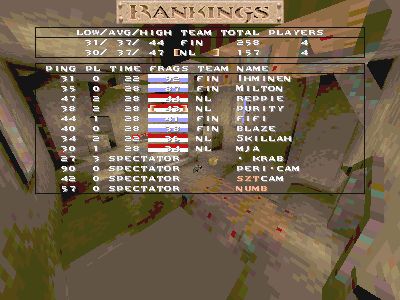 After some good pushing by JohnNy cz he managed to get the teams play their last games quick enough so that this game was played during Dreamhack. He arranged a time on which the game would be shown on the big screen. On both dm3 and dm2 the Dutch National Team managed to set quite some pressure and create opportunities for themselves. At some points it looked like it could go either way, especially on dm2 when Reppie was on a roll, but the Finnish team came out on top in both. On e1m2 Finland was leading almost the entire game but in the later stages the Netherlands got a decent control of ya and quad area, tying the scores with little less than 3 minutes left, from there on they managed to play it out well despite good efforts from Milton to make it a clear 3-0 victory for them.

The starting time of the game was planned to be the same as the start of the screen time but they pushed it back to ensure that murdoc would be able to play three maps. After winning the third map this meant that he had to leave and was replaced by skillah. After replacing dragon, who wasn't feeling too comfortable with his game due to inactivity and because he had to set a new sensitivity after he noticed acceleration when reinstalling quake, with mja this meant we saw an unusual Dutch lineup. In this second e1m2 Milton controlled the MH and crossing for almost the whole game while Ihminen was running the quads. The Dutch team had a lot of trouble to build up decent attacks and never got close.