The correct title of this article is nQuake. It appears incorrectly here because of technical restrictions.

Installing QuakeWorld manually and getting the setup you want can be very tedious and time consuming. nQuake is a package designed for those who do not possess the knowledge to quickly assemble a working/playable QuakeWorld installation. Over the years, however, nQuake has become the standard package to download when you need a freshly installed QuakeWorld. There is also a server package called nQuakesv. 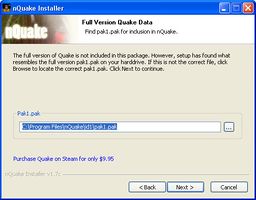 A screenshot from within the nQuake installer.

Installing QuakeWorld using nQuake is as simple as downloading, installing, and playing. You will be able to start playing right away "out of the box" without any need of help. And should you still need help, the helpers on #qwrookie will know exactly how your QuakeWorld installation looks like, and get you the help you need faster than ever. Also, a visit to www.quakeworld.nu is recommended. 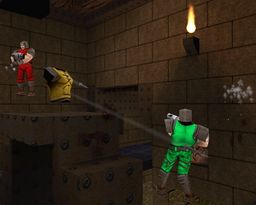 In September 2003, eQuake was released. It was an all-in-one package containing everything you needed to play QuakeWorld. eQuake had several problems, one being that it contained the registered Quake data (pak1.pak), another being that it broke several licenses (Quake shareware license and GPL license) by including data using different licenses in the same package.

To solve this problem, fQuake (eQuake v2) was released in May 2006. What fQuake did differently was that instead of mixing all the data together — and breaking the licenses of Quake shareware and GPL — it broke them off into separate so called distribution files, and downloaded and installed them individually. fQuake also got rid of the pak1.pak file, making the package completely legal and free. However, since fQuake was an online installer, there were no real limits to how much data could be added. This made fQuake grow into a huge installer with tons of options, resulting in fQuake becoming very unfriendly to beginners.

Since a flow of new players was the main thing QuakeWorld was lacking, this had to be fixed. The fQuake package was stripped of everything that was not needed by a beginner, and everything was made to work "out-of-the-box". This new package was named nQuake (eQuake v3) and was released in July 2007. This time around, the package was aimed at the newcomers of QuakeWorld. In combination with the rookie tournament Ignition, nQuake helped the QuakeWorld community grow substantially during the summer of 2007. In addition to this, Quake is now available for purchase on Steam, making it easier than ever to purchase and play QuakeWorld.

In July 2012, nQuake was updated to version 2.0. With this release, the GPL maps were finally added to nQuake, making nQuake literally the only thing you need to download to play QuakeWorld. Up until now, users have been forced to either buy Quake (which you all should, by the way) or download pak1.pak illegally. This marks a huge step forward, and makes getting started with QuakeWorld one of the simplest things you can do.

In December 2012, hifi helped Empezar create a java launcher that downloads and installs nQuake completely without user interaction. A separate nQuake package was developed for this purpose. Its size was reduced from ~90 mb to 10 mb. This reduces the installation time from minutes to just a few seconds, provided the user has JRE installed. It has the capability of joining/observing a server directly from the browser. The client automatically updates itself upon each launch, making features like "latest news" possible, and on-the-fly ezQuake client updates. The project is called nQonline and can be tried out here.