Fragfest '96 was supposedly the biggest QuakeWorld event held in Europe of the year. 50 of the best players around at the time gathered at IVA's Conference Center in Stockholm in order to find out who was the best FFA player in Sweden at the time. The 50 players were divided into groups of 4, with the best 2 being allowed to continue into the next round. Two tables were provided by Gateway, each of which had 4 computers.

The Quarter Finals brought a surprise as

Totte, who everyone was surprised about for performing so extraordinarily, as well as

Sniket. One of the reasons for Nikodemus's loss might have been due to the fact that the two maps played were among his most hated.

As the games were played at a LAN, the semi final brought even more surprises. Feared players

Buchman were beaten out of the tournament by former modem-victims

Eraser, neither of which made it to the final in the end, despite their astonishing performance in the semis.

The Final was played on E1M7, The House of Chton, for 40 minutes straight. DOOMer managed to win the final and was thus the one to take home the first prize of the event, a brand new Pentium 200, and a certificate. 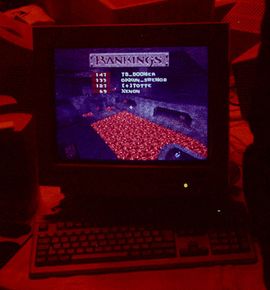 Dance of SC's report from Fragfest '96:

It was a very cold Saturday morning when Quakers from all over Sweden met at IVA:s conference center in Stockholm for the biggest gaming event of the year. Fragfest '96 was heavily sponsored by companies like Gateway 2000, Microsoft and PC Gamer. Gateway supplied the computer equipment and 1st prize while Microsoft and PC Gamer provided additional prizes. It took some time to get everything organized and ready to go so the actual event didn't start until 13:00. By that time everyone was excited and eager to start playing.

First Adam Schaub the master of ceremonies greeted us all welcome and did a quick brief on the rules and how the game should be. Due to the less than planned turnup of only 50 players instead of 128 the initial rules was a bit changed. There was going to be groups of 4 players on 2 tables playing deatmatch for 2 x 20 min on 2 different levels. From each group the two best players would qualify for next round.

After the short introduction the games were off to a flying start. There were no really bad players, just more or less good. Of course some had to be the ones to be beaten in the first round and those players included people like Shining/KI, Hobbex/DA and me (Dance of SC). Among the players who made it to the the quarter finals were Doomer/TB, Eraser/TB, Sniket/UYB, Nikodemus/SC, Xenon/UYB, Totte[+], Kryo and Okkun/SWEMOB.

In the quarter finals the matches were getting tougher and more intense. A player who surprised most people by acing his quarter final was Totte from Crusaders. One of the players in Tottes group who learned this the hard way was our own Nikodemus. Faced with both Totte and Sniket on two of his most hated levels he was beaten and out of the game. Clans with a lot of members still in the game was UYB, TB, CMC and Crusaders.

The semifinals included the best Quake gaming I've ever seen. The best players fighting with no such thing as a ping advantage. The feared players of CMC, Storm and Buchman was eliminated by their former modem victims Sniper and Eraser. When all rocket blasts, gibs and blood cleared only four players remained: Doomer/TB, Xenon/UYB, Okkun/SWEMOB and still hanging in there Totte from Crusaders. The ultimate challenge awaited them, the final with four of Swedens best Quakers.

The final was played on E1M7, House of Chton, 40 minutes stretch, no pause. By the looks of the game and amount of kills all the time you would have thought that it was eight people on the level and not only four. No one lived longer than a minute at a time, it was just the question of who was able to gib the others most during the short time he was alive. It soon became clear that this game was out of Xenon's league as the others fragcount rose away from him. Doomer grabbed the lead by 10 frags and Totte and Okkun took turns beeing on second place.

What Doomer once get hold of he never lets go. That included the lead he got at the start of the final. Totte and Okkun did their best but they just couldn't match Doomer who when the timelimit expired had an impressive 137 frags, 14 frags over Okkun who was closest after on 133. Totte who had played very well all night ended up a total third 6 frags after Okkun on 127. Last in the finals was Xenon at only 69 frags. The finals ended just before midnight and a lot of tired but happy quakers left the battlegrounds for a warm well deserved bed. The ten best quakers in Sweden got prizes for their efforts in Fragfest '96. Besides the computer Doomer got the prizes consisted of games from microsoft and a Quake expanion set called Aftershock.

See also Hobbex' report for details about results on each map and more.