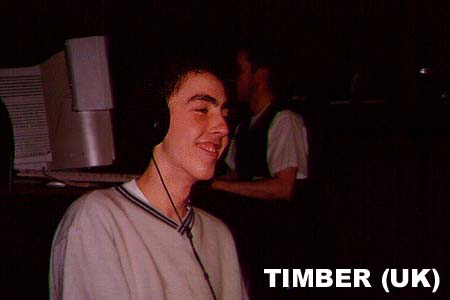 «The player who seemed to be having the best time at the TGI was Timber, from the UK. Considering that he was basically knocked out of the tournament by Reload in the first match, his attitude was very positive. Timber was always cracking jokes and having the other players on. Regarded before the tournament as primarily a DM4 player, this was confirmed by his performance overall. Timber won 3 games on DM4, against Xenon, Reload and Columbo. However, Columbo also won 2 games against him on DM4, and Lakerman won their DM4 game by a large margin. On DM2 and DM6, Timber found himself being used for target practice a bit too often. Timber will have to broaden his game and improve if he is to compete at the top level, much like Reload. It would be nice to see these two meet again in Quake3Arena, since they enjoy a very competitive game. As for Timber's famous «quick hide!» tactic in his DM2 game against Reload, I was watching and he was grinning like a cheshire cat. It was definitely one of the most memorable moments in the tournament.»

Timber was the UK's #1 DM4 dueller around 1997-2000, but the skill which made him stand out the most was his LG aim, which at the time was unmatched. In 4on4's for QPD he would roam the map with a Quad LG, mowing down all who stood in his way before they could shoot back. He didn't perform as the UK had hoped at TGI in 1999, but did ascertain that he was one of the best in the world at DM4 duels.

random: [Someone] thinks he's unbeatable on dm4
Timber: that's because he hasn't played against me