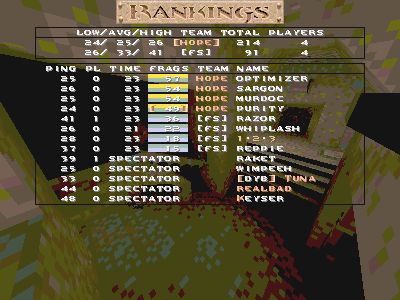 We arranged the game at friday, last date that both teams were able to field a team. FS had a hard time fielding players but after an hour of waiting they had Reppie, Spoink, Razor, Blixm, 123 and Whiplash. I think spoink had to leave and blixm didn't like the maps so 123 and Whiplash took their spots. FS didn't know the map but got the first rl's taking a small lead. Soon we could take over and build up a nice lead. They were scrambling some frags but couldn't come close enough. 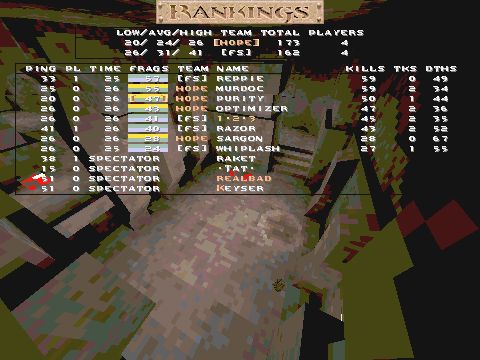 FS got the weapons (RL/LG) while we ran away with Quad and Pent. Despite those two powerups reppie was able to take the second RL with which he and 123 established a nice control which lasted five minutes, they were leading with about 30 frags when we took second pent, from that point we got some ra control. We caught their score a minute later and were launching attacks on ya where they build up good resistance. Our lead was about twenty frags halfway the game, but we timed the pents better and got them all. With that we got the win, taking the last pent and still having ra and quad under control. Two minutes to go, 20 frag lead for us, we just played it easy and took the victory with 11. 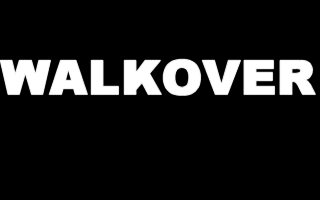 By the time of the third map Reppie had to play duelmania vs inter and even though Spoinka and Blixem were online earlier they had nobody to take the fourth spot in their squad. Despite FS couldn't field their first team they did play and made it a nice fight, too bad the game was delayed for an hour but after that was left behind everything went very friendly and sportive. GG's and take home the Classic cup and next NQR title please :)