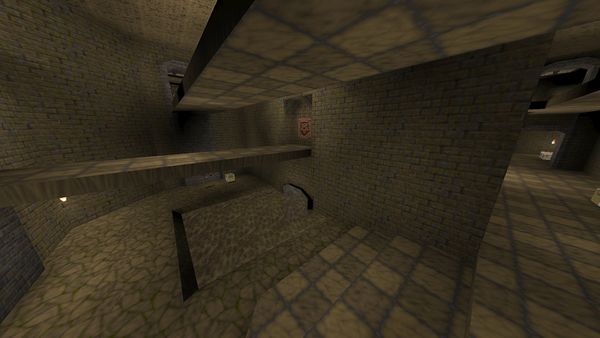 The Cistern is the fifth deathmatch level of Quake. This level is named for a room that is nearly submerged in water being a control point of the map. Platforms surround the upper floor which allow for quick access around the level, plus a teleporter system quickly links opposite sides of the map.

The Rocket Launcher is located behind a door that requires the player rush down a platform and press a button before getting through the locked door. This map is rather unpopular due to the difficulty of getting the Rocket Launcher as another player could easily control the door from the upper platforms. However, it does still manage to get more attention than dm1: Place of Two Deaths due to containing nearly all the weapons in the game, lacking only the SSG.

Unfortunately not popular at all, the misplaced RL (behind a button-activated door) totally wrecks what could have been, potentially, a decent map. This map was however included in many unconfigured FFA servers past. A rush of the distinctive squelching sound that signifies players leaving is a certainty if this map is included in any FFA map cycle today.

The size and general layout, with the lack of RA would make this a reasonably decent, fast-paced map - if you could actually get an RL. This map could be great with some fresh ents. There are 6 spawn points on the map.

The map's only RL can be totally camped by anyone standing on the top bridge. This makes it almost impossible to get an RL in practice.

Don't rely on being able to get an RL, probably best to concentrate on the GL next to the rear water entrance.