This was the moment the league had been leading up to. The two remaining clans were just about to face off against eachother in a thrilling best of 5 matchup. CAPS had all their guys travel by car to another game-location where they could get the best possible connections. FF had one of their players flown from Stockholm to be ready for the decider. Everyone was set for this match.

After some testing, quake.get2net.dk was found to be an ideal arena for this battle. Both teams pinged in around 28 ms and packetloss was mostly unheard of. After some scrambling from my part to get some proxy-cams available (well we did get a number of seats in the end), the match commenced on dm3!

Spawn! FF quickly grabs the first quad and I am pretty sure that CAPS got hold of the pent. First rl's probably went to CAPS but FF did good and amassed to wait for the next quad. Taking the second glowing thingie, they secured RA, CAPS keeping their ground around ya/bridge. Still, FF are doing very nicely so far in the game, taking the third quad, swamping yellow and holding red. FF are allready taking a firm lead.

17 minutes left of gametime and we have FF in the lead by 26 frags. They camp and take the next quad and succesfully defend their positions from CAPS agression. CAPS are lacking in good positions now though, they have 2 guys over at sng and at least one at ya/bridge. FF move quickly from red armor to quad and take the next powerup as well.

The game races on and it is now closing in on the 5-minute mark ... and we all know what that means. FF have three guys by the window but two CAPS players threaten to advance from the quadarea. Pietro secures and takes the pent though, but I am pretty sure a CAPS player got hold of the quad. In any case, FF continue to play strong managing to take the next quad. CAPS are putting pressure on their opponents but aren't getting any opportunities.

With 13 minutes to go, FF are leading with a steady 53 frags. CAPS however manage to get three of their guys to quad and protect it. FF give it up as they see that the quad is beyond their reach. CAPS take the quad and attack ra. They are driven back after some initial successes. CAPS now hold rl/ya with FF around ra/sng.

The game now starts to shift slightly as CAPS steals next quad. Quad gets killed but CAPS are playing more determined and kill FF's next quad in retaliation. Mid-game and FF have a cool 71 frags lead but ...

CAPS get a guy with quad-ring, and I'll be damned if they don't get the pent as well. aKKe pulls one of the finest stunts in the game by bouncing the quadguy from the penta-window, making him fall to his death =). CAPS are retaliating though, and they even have ra for a short while, taking the next quad as well.

With seven minutes to go, FF are up by 77 frags, but CAPS are reducing that lead. CAPS take 150, get another quad and bring it to ra. FF have shifted positions, now gathering around ya/bridge. CAPS continue their trend and take the next quad, but FF takes the pent just when it spawns. FF now increase their lead again but CAPS manage to do a nice steal by quad using the ring.

4 minutes left, FF +74. CAPS are clearly gaining momentum now. They take quad and as always bring it to bear against ra. Theres a fight for the next quad and CAPS win it. In the last minutes, CAPS take ra and hold it. This pushes FF back into ya/bridge and allows CAPS to gain the upper hand in the last period of the game. With one minute to go FF's lead has been reduced to 57 frags. CAPS take the last quad but it is discharged by aKKe. In the last few seconds exile also takes two opponents with him (and his thundergun) into a watery grave. Match ends --> very good game! 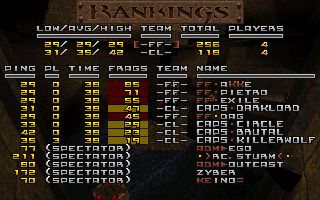 Teams decided that E1M2 would be the second map to play, and so it was. Game started with DARKLORD taking the quad and his shotty out for a fraground in the "swamp" as the americans would call it. He quickly racked up around 8 frags this way and CAPS got an early lead. FF were not far behind and went for the second quad. Their intervention was without result however and again DARKLORD ran amok with the shotty/quad-combo.

FF managed to take up positons by the ya however and damn it if they weren't going for the third quad! 18 minutes to go, CAPS lead by 5 frags thanks to DARK's sweet aim. Amazingly, as FF have the quad-area covered, who comes around the corner to steal the quad? You guessed it: DARKLORD! And he gets the powerup, creams the FF defenders on-site and lifts his team to an even stronger lead.

CAPS take ya while some FF guys try to get an rl. CAPS camps the next quad and takes it. It is killed shortly after though. CAPS are still looking very good and have most of the upper levels of the map. FF are trying to get some rockets to the front. Indeed FF are not out of it, they take the next quad ... and CAPS mows it down.

Situation still looks like this: CAPS, upper level, good positions. FF, adrenaline junkies, a few rocketlaunchers. 5 minutes into the match, CAPS are in the lead by 15 frags and take another quad. FF's rocketlaunchers are beginning to make their presence known though and some of their players stock up on health and ammo at 100+. From there they rush to get the quad ... and get it. FF attacks yellow and takes that position. Now they have an advantage and they quickly take the lead from CAPS. FF have ya and they are holding on to it.

12 minutes to go, FF up by 8 frags, taking quad. It's now evident that FF are taking control of the match. They take the next few quad as well and continue their hold on ya. Mid-game and they lead by a strong 44 frags. When CAPS take the quad, they defend the corridor with a hailstorm of pineapples and rockets.

FF continue to take the next few quads and generally outplaying their opponents. They now have control of the upper levels of the map and CAPS seem confined to the 100H-area. FF keep taking the quads and holding ya. CAPS pull of a nice grenade attack at yellow armor but with 3 minutes to go and a 113 frag lead to FF, this map is allready decided. CAPS manage to attack and take to quads at the end, but FF get the final quad and the match ends with a clear victory for them ---> amazing play from everyone! 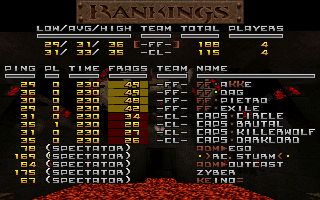 Spawn! CAPS get a good start, at least one rl and the quad. They are quickly dealing it out, getting about twice the number of frags that they give away in return. As in all DM2-games, there's the initial fight for positions. As the quad runs out, it is obvious that CAPS pulled the shortest straw here. FF take the important stuff and if I am not misstaken, take two quads in the row here.

17 minutes remaining, FF up by 12 frags. CAPS hold the backroom and kill the FF-quad who comes to tidy up the place. There's a fight for the next quad and CAPS win it, taking control of upper rl as well. Now CAPS fights back, taking two more quads to push FF back into lower rl and to tie the game 50-50 around the 6:th minute mark.

Another quad for CAPS giving them the lead. Right now, FF are mainly fighting for posession of lower rl, CAPS seem to have most of the other stuff under control. One flaw though ... they seem to have forgotten about the tele!

12 minutes to go, CAPS up by 8 frags but FF get to quad and take it, sending CAPS reeling. FF now have tele and quad/upper rl. FF make some rounds past lower as well, but CAPS retreats to back. FF are now in the lead, having swung the positions around. FF taking the quads and keeping themselves stocked on launchers and rockets. They even hold lower rl for a short period and the frags go up.

8 minutes remaining, FF +30 frags. Now it's CAPS who take the quad and attack lower rl. FF are there to reclaim it though. Not willing to give it up, CAPS takes another quad and brings it to lower. It is all working fine until aKKe telefrags the quadcarrier ... hrm.

5 minutes left, FF still leading by 30 frags. FF are holding upper, but CAPS have a few rl's at lower/backroom. The quad perishes in a close combat on the ledge but FF keep control of their positions and are there to take the next one.

1 minute left, FF leading by 50. The last minute is a complete lockdown by FF. They increase their lead by 23 frags in that last minute, making it 3-0 in maps and a decisive victory for FF!

What can I say? Congratulations FF, new Arch-Villains of Europe. You have proven to be the unquestionable champions of qw this season. I dare say that there are no competitors from outside Europe who could match you either. Great effort from CAPSLOCK who have fought an amazing series of matches to get to the finals. They have shown themselves to be a very qualified team and don't be fooled by the numbers, these matches were a lot tighter than they might seem at first glance. Once again, GG to all and thanks for participating in the second season!