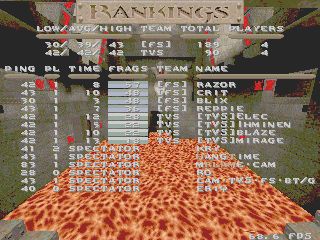 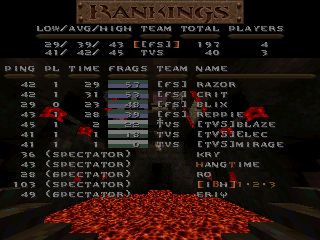 The outcome of this game was highly unexpected since dm2 had been Firing Squads worst map for a few years. On the other hand The Viper Squad was and is well known for their skill here. With about two minutes left the qizmo The Viper Squad was on died but it was clear Firing Squad sealed the victory and they moved on to the next map.

game started fairly even, ihminen getting one rl, crit the other. crit goes to gl/mega with quad while ihminen secures tele. however he makes the mistake of coming thru the tele while quad is still active and gets a quad rocket in the face, crit guarding the pack for a teammate afterwards. FS generally has the best of it from then on, locking down tele side of map while tVS is forced to stock up at low rl and ra/mega. razor has a few good quad runs in the first 5mins, before blaze attacks quad from bigroom/high rl, you know which way i mean :)) next couple quads get killed pretty quick, tvs looks like they might get back into the game. however FS has a bit of "luck", crit able to survive in secret RA with 1h and rl. Blixem does a pretty good job camping tele in the last half of the map and with less than 3mins to go FS leads with 99frags. Then, all of a sudden all 4 tVS players drop at once. since tVS werent exactly in control of the map, i dont think anyone thought they could pull back 100 frags in that short a time, so i awarded this map to FS. It soon became pretty clear that g2n qizmo had fuckedup somehow since the cam was disconnected too. 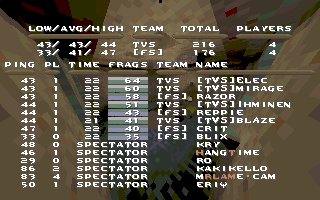 The headadmin of Smackdown at the time, HangTime, said he would eat his shoe and quit his headadmin job in case Firing Squad would lose here. This is because the reputations on this map were turned around here compared to dm2. HangTime did not stop as headadmin, it's not known if he ate his shoe.

e1m2 kicks off with ihminen getting rl and going to mega as usual, i think reppie was doing some quad boomstick ownage but nothing too important. this game was going really close for a good 10mins, fs having a short lead maybe around 90-70. The most memorable point of this game for me was when FS looked like they might be going to take control for good, with YA safe and razor running a quad or two. Then elec comes round in water to ya, rjs up and fires another rocket from midair, killing the fs rl stood at YA. he really seems in the zone from then on, racking up a whole host of single rocket kills around ya and gl before taking the next two quads, running back and forth between quad/ya until its safe with teammate, and eventually attacks bridge area. tvs pulls out a lead of around 40 frags by the end, and my career as smackdown chief is over, elec was obviously keen to oust me (read my comments in an earlier newspost if you dont know what i mean :>). 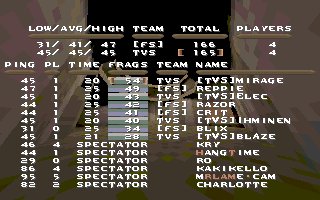 Because of the unexpected results on dm2 and e1m2 and the teams being seperated by one frag on this decider the game went into the history books as a true classic. Purity

dm3 starts with reppie getting first rl for fs, and tVS taking pent. Reppie gets 2nd YA and then moves to ra, crit helping out with pine skills and he takes RA soon to attack quad. Then it happens again, GG2net fucks up and tvs is disconnected with FS looking in a strong position. Obviously with only a minute gone this game had to be replayed unlike dm2.

take 2: tVS gets fullstart-ish, with pent+rl leaving just quad/ring for fs. ihminen looks good early on getting quad in first 2 mins or so and fs builds up a small lead of around 17 frags with 2 and 3 mins gone. Well..... a small lead in normal games but in this one it was like a 500-0 owning. I think fs got the 2nd pent helping them to restore parity, and from then on i dont think there was ever more than 5 frags difference between the teams. Some fantastic fights took place all around the map, with neither side ever able to gain total control. The team with RA was always under mega pressure at quad and so couldnt afford to leave a man with rl stood at RA fulltime if they wanted to get it. tvs got the 10min pent relatively uncontested i think, maybe it was the last one:) my mind is such a blur after this game. blaze fucked up his first rj to lifts, i remember that much and went up with 1 rocket. With around 7mins left reppie had sneaked out to sng with rl/lg and full YA. He was very patient with his ra attacks, not risking dying and doing quite a few "peek-a-boo!" type shots up from back entrance. Amazingly, the game was staying so incredibly close, the average score difference during the last 15 minutes was probably only 2 frags or something. With around 3mins left the game went TOTALLY INSANE with some of the most exciting - if not necessarily skillful - fights around the centre area. backpacks flying all over the place, people rushing to grab them and then being mercilessly hunted down by their opponents. at one point reppie died at quad, spawned down low and his pack was hanging teetering on the edge of quad platform, but didnt drop down. think of the ending of the film "the italian job" and you will know what i mean. on several occasions i saw something i thought i would mention as deciding the game in my report, a quad bore or good kill, a borepack retrieval or lucky escape with 1h. but the intensity just kept on increasing and a river of red started flowing down from the mega-mound into the water at bridge. i would love to have seen what ego would have made of this game with one of his famous irc commentaries :) Then, with 1min to "the game is a tie" comes up on screen, haha i bet that kept the players interested. fs has a small lead but tVS has massed with 3 ppl at quad/ring and are determined to get it in a last ditch attempt to recover the map. mirage attacks YA, the fs player gives him his rl but with the various fragging going on around the map tVS still needs some frags. some specs seem to want FS to hide, but they are still fighting away since scores are so close. Mirage charges into RA killing 2 fs players, but was just too late to prevent crit getting a crucial shotgun kill. No time to hang around playing CS with less than 10s left at RA though, and mirage goes to mound and is hoping to get to the FS players at bridge.................. tick tock its all too late................................................................................. ............... GGGGGGGGGGGGGGGGGGGGGGGGGGGGGGG FS wins by 1 frag!!!!!!!!!!! GGGGGGGGGGGGGGGGGGGGGGGGGGGGG

well ok so that wasnt the goodest report or piece of english writing i`ve ever done, but a game like this isnt about carefully scripted text, its about raw carnage, feelings and instinctive thoughts. Just go watch the demos if you wanna see what really happened, I can only say it is one of the best and most exciting games i`ve ever seen. Whats that i hear you whispering??? "QW IS DEAD!!!"?...