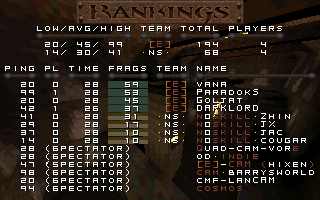 Dm3, NS's choice. They had originaly chosen DM2 but I think the change was due to just losing heavily to CMF in a warmup game before hand. In saying that their confidence must have been hit quite badly after that game. The game starts: NS get all the powerups but fail to do anything useful, Goljat gets 1st RL and E have the RA secured. A couple of "gg"'s from the specs anticipating the game had already been won. E suffered lag problems with ParadokS and DARKL0RD spiking to unplayable lag for a few mins, this happened on more than 1 occation. And ParadokS sure let us know about it ;(). NS tried their best to get some sort of control. Stealing 2 or 3 Quads from E and Stealing the RA back (for a few seconds). At the 15min mark there were more "gg"'s as E take the Pent/Eyes/Quad. This for NS signalled the end of the match, despite their efforts (they got RA secure onve or twice) could do nothing about E's stronghold. Entertaining game. I recommend Goljat's POV available on ch-tv 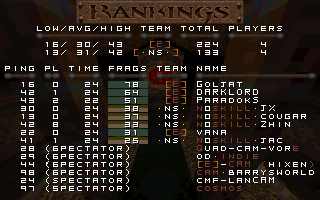 E1M2, E's choice possibly down to it being named "The Castle of Vana". NS get the 1st Quad but fail to do anything with it as it's killed straight away, giving the feeling of another 0wn4g3 from E :> DARKLORD takes the 3rd Quad along with an RL pack and more calls from the specs of 'GG' (damn those specs ;() but looking at the /stats DARKLORD still has 100% effi which says it all really. DL goes on to run a few more Quads but NS stop E from getting an EaSy win by keeping the scores close(ish). DL doesnt lose his 100% untill the 13min mark when NS steal a Quad aswell as having atleast 2 RL's. But the comeback was not to be with E quickly regaining control and never actually losing control of the YA. The struggle for control goes back and forth the rest of the game and the finishing score really doesnt say the whole story, and perhaps a little unfair. Which was suprising. But more surprising and maybe the reason for NS even being in this game was the poor performance from Vana who is notably good on this map (The Castle of Vana) Possibly quite worrying for E, but most likely just a bad day ;) DARKLORDS demo is recommended due to his 7mins of 100% and quite a funny thing with the quad ;)) gg.