One of the top German clans from 1996 until 1999. The clan invented the Ocrana LEDs which replaced some rarely used characters in the default quake font with bright LED like characters to be used in team messages.

Ocrana was founded on IRC on October 30th, 1996. On November 2nd 1996, Iceman submitted the clan data to ID Software - giving the clan ID #761 as of November 19, 1996. The clan played its first clan war against Clan Necro on the 4th of December 1996. In July 1997, Germany hosts its first big QW Lan: Q-Nite. sLoP manages to win the 1on1 tournament vs Streedor. In July of the same year, Ocrana supposedly won DeCL Season 1.[claim disputed] 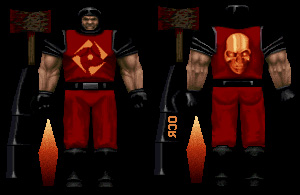