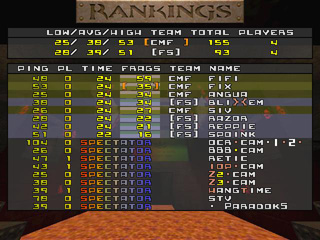 "It was time for the most important game for us this season. As usual, we prepared accordingly by sending angua and sugar-sajv to sandyman's ghetto. This proved to be a great move as our young guns showed up in red hot form. Dm2 started out great and soon the man of big games was doing the badger-dance like it was year 2003 all over again. FS thought this was ridiculous and refused to join the party. Being the social posse we are, we decided to send a dude with glowing partywear to invite them once more, but they kept shooting us down time after time. Ah well, can't expect everyone to like us :/" - by Clan MalFunction 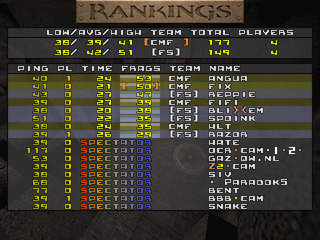 "Sugar-sajv was a little bummed out as FS didn't join the party so he decided to step out. In came no other than the shady armsdealer from stockholm, hukadorf. His experience from the streets of cmt3 more than compensated the loss of siv*ler*. This time FS were in the mood and we did tango, walz.. you name it. All in all we had a good time and hope to do it again sometime FS!" - by Clan MalFunction

"ok early end of season for us :), wasnt very nice by us to get us cmf as opponents in quarter, we havent been very active during groupplay, only played the nqr games and like 3 pracs, mostly because of reppies and blixems lag, these was good games i guess, felt a little like an unsatisfying playoff game thou for us, since we have been kinda unactive we havent had time to prac cmt3 almost anything, we have barely even played it, but it was a smart map choice by them, so we faced the situation and prayed to the gods for that dm2 game, but that didnt help cause they got fullstart, we tried to not give away so many frags so we could make some comeback, but they kept us pushed back into low very nicely with quads, we usually attack more i think.. dunno why we didnt this time :) maybe after like 15 minutes we made a comeback but by then it was far too late.., so its a shame, we felt we could give them a good challenge on dm3/e1m2 and maybe cmt4 too althou we havent played that much either, so maybe it was a bit unsmart to pick dm2 with the risk of fullstart, since we were depending on that one only :) i think reason was cause we thought of saving dm3 and e1m2 for decider.. and were afraid they would toss dm2 then, but shit happends and cmf is a very solid clan, i hope they win nqr :) and i think they will too, bye for now, until february?, rep seems to have kick-ass ping now too, so maybe we can prac more and be more in shape for next season, gl to the other teams :(" - by Firing Squad