From QWiki
(Redirected from Lakerman) 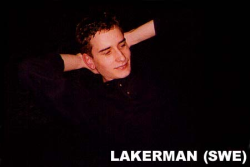 Former QuakeWorld and Q3 superstar LakermaN became an online professional poker player in spring 2004. People say that he won $100.000 in the first 12 months he played poker and his winnings are now estimated over $1.000.000.

In his QW days he was considered by some to be the finest all-round player, always retaining his _of_SC suffix. A demo of him ravaging Reaper bots on DM4 was distributed far and wide, ensuring his reputation always preceeded him.

See also this interview with LakermaN after his TGI win.

«Only one player could win the TGI and that player was Lakerman, from Sweden. The top seed from the very beginning, Lakerman played the best games of Quake I have ever seen, and probably the best games of Quake that will ever be played. Perhaps the single biggest reason why Thresh did not attend (with the exception of not wanting to face Xenon on DM4), Lakerman showed us all how much he wanted to win when he leapt up and screamed at the top of his lungs after escaping Kane in the final seconds of the last game on DM2. The room was in shock and high emotion as Lakerman claimed the crown of best Quake individual player in the world. Argue with me if you like, but I say Lakerman is the best - it's up to the Americans to challenge him for that title if anyone disputes it. All hail the King! He lost only two games, DM6 to Kane and DM2 to Reload, and on DM4 he was the universal master. The level to which Lakerman took the game of Quake will probably never be truely appreciated - he created sublime magic. Lakerman took Quake to the heavens and we were all able to share in his incredible journey.»