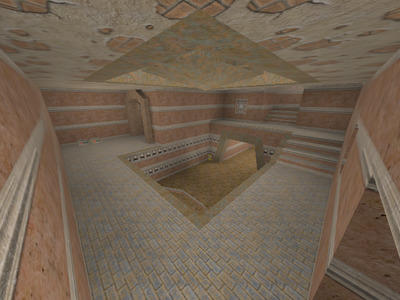 One of the most popular maps in both 2on2 and 1on1, also included among the "Big Five". In the early days you would mostly find this map on popular Russian servers. Later in 2008 a total of 62 players gathered for a ztndm3 Showdown between Scandinavia and East Europe.

Ztndm3 favors a variable pace approach, and has a good tendency for lots of spawn frags due to a number of spawn points being close in the main RA room. Ztndm3 has control points at the Grenade Launcher (near RA and MH), and upper Rocket Launcher (near YA), and also a number of long corridors that favor LG usage. 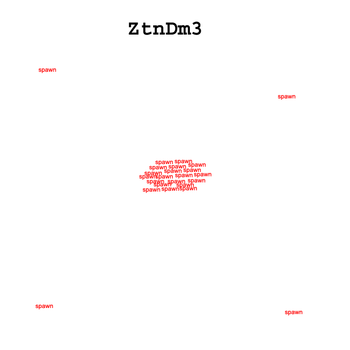 With a total of 30 Rockets as well as two Rocket Launchers and a Grenade Launcher, people tend to complain about the vast amount of 'spam' on this map. Once in control of the central area, all paths leading to red armor can be spammed using grenades or rockets.

The spawn point placement also contributes heavily to frequent kill streaks. From the T junction in the middle area, you can hear all spawn points except for the one behind the Grenade Launcher and have near direct line-of-sight to most of them.

There is a variation of the map occasionally played in the United States, known as ztndm3q, which moves the Mega Health into the long hallway between the Lightning Gun and the Yellow Armor and replaces the Green Armor with a second Yellow Armor.
These changes mirror the Quake 3 version of the map, and tend to change the gameplay in that direction: slower paced and sneakier.