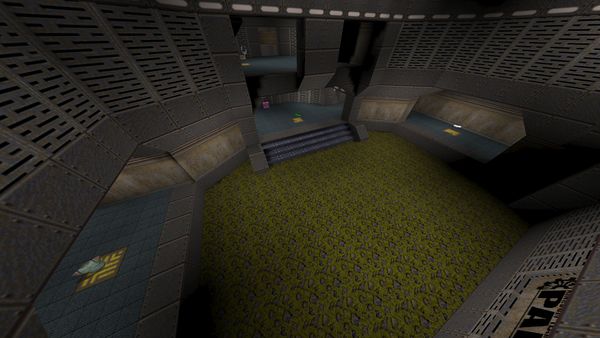 UKPAK2 is an oldschool, large 4on4 and FFA map with dark industrial textures. The map resolves around the big courtyard in the middle from which a Lightning Gun, Grenade Launcher, Green Armor and the Quad Damage can be obtained.

From the Multiplayer Quake Archive this is what Zor said about his map himself:

1. What problems did you have whilst making your map?

The problems I seem to have was scale, I wanted to do so much more of a diff scene but if I did, then the space would have been huge beyond belief, so I had to opt for a trimmed down version.....mebbe it would have worked with diff textures, but as aardappel had already selected a set it was wise to stick to the UKPAK ones.

2. Which part(s) of your map are you particularly pleased with?

Well I really like the outside part as your standing on the grass verge, its nice to see what you had in mind in a actually playable map, just the way you imagined it...well ok, mebbe it wasn't exactly the same as I had planned, but a few differences happened,, but sometimes the differences or mistakes are sometimes the best ones... :)

3. Is there anything you don't like in your map?

Well there is not much I can really say to this. the map flows nice and looks nice, so not really...if there was anything major, IM sure myself or one of the UK mappers would have spotted it and pointed it out...

4. Even though there is a standard set of textures used in each map, what have you done to show your individual mapping skills?

Well, my maps have "my style" just the same as other ppl have, there own ability in map making is always different from the next.. but its the lil things sometimes that make a mappers trademark, and mine is the angled edges to doors or posts and even roofs... the ukpak2 is covered with them really :)

5. Is there anything you wanted to add to your map, but didn't get chance to? If yes what would you have done?

Well see question 1 really.. see originally I had thought of a double platform window (above quad) - but the textures used were way to big for that, so I had to opt for a single platform..shame