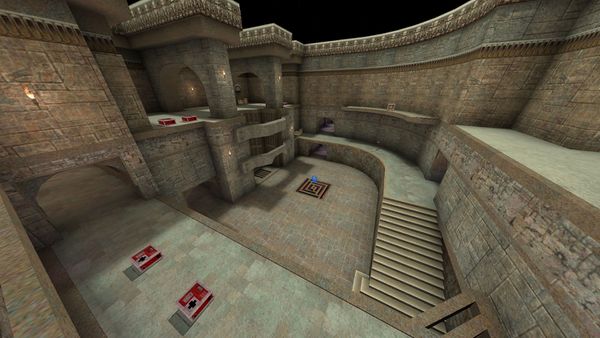 Almost lost was made by id Software during the development of Quake 3, yet it was not finished and included in the official release of the game. It was eventually found and recovered by

Fred Nilsson. It was supposedly being created as an homage to The Edge from Quake 2, but being in the incomplete state that it was in, Fred Nilsson ended up just finishing the map off, and presented it to the public. The map indeed has some architectural similarities with The Edge but is smaller. It also features a few unique new textures.

lurq helped converting it to QuakeWorld, adding another RL and removed LG, to make it ready for Ride My Rocket 2on2 Tour 1. With these adjustments came the new mapname alrl.

The map's name probably comes from the fact that it was (literally) almost lost and might have never been seen by the Quake community, if it had not been found within the archives.