From QWiki
(Redirected from CTF)

Capture the Flag is a popular modification developed by David "Zoid" Kirsch. The most popular type of ctf in qw is Threewave CTF. 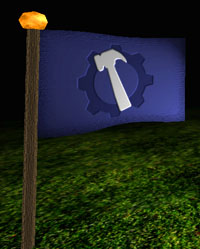 In late 1996, Zoid setup the first Threewave CTF server. It was imediatly accepted by the community then, since it was the first goal oriented teamplay mod. CTF had its own community, where most ctf players didn't played dm and focused only on CTF.

There's 2 teams, blue and red. Each team has a base on the map. In the base there's the Flag. Besides regular Quake weapons and powerups, there are special powerups called runes (see below) and a moving device, called grappling hook or simply hook (see below).
In terms of gamemodes, natively ctf is meant to be played 5on5. 4on4, 2on2 and even 1on1 is accepted. its always fun fun fun!

CTF is a goal-oriented teamplay mod. The goal of the game is to capture the enemy flag. To score, one team (a specific player - the flag carrier) has to bring the enemy's flag to their own flag stand. You can not score if your flag is not on the stand. In that case, you must survive with the enemy flag until your own flag is returned, and then you can get a catpure.

If the flag carrier is killed, he drops the flag where he died until someone picks it up. If it is picked up by the attacking team (either the person who originally dropped it, or one of his teammates), the person who picked it up now carries the flag. If instead the flag is touched by the defending team, it is automatically and immediately returned to its home base.

Each captures gives the capturer 15 points, plus 10 points to each of his teammates. In 4on4, that means each capture is worth 45 frags. In addition, there are assists for both killing the enemy carrier and returning your flag right before a catpure. There are also bonus points for defending your flag at its base and for defending your team's flag carrier against an agressive enemy. Finally, a regular frag counts as 1 point.
The team with the most points wins the match.

Hook, grapple... Capture the Flag is unique in that it has its own special mode of transporation, the grappling hook. It takes time and effort to master. Good grapplers always have advantage. There are versions of CTF without hook, but those aren't popular in Quakeworld. In other fps games, ctf hook versions are known as "classic ctf" or "pure ctf".

David "Zoid" Kirsch: ...As for the grapple, after seeing how it was being used so effectively in CTF, I felt it was too fast. A player could be gone before you had a chance to even blink and that made it too powerful. But, it became part of the game and players worked to accommodate it."

CTF is also unique in that it is one of the only gametypes that has its own special powerups, called Runes.

David "Zoid" Kirsch: "The runes are all about control, control the runes and you can take control of the level. Good CTF teams take great care in protecting their rune bearers and placing them in strategic positions."

The runes are one of the keys for victory. Use them wisely. If you have a rune you have an advantage. You can only carry one rune at once. More detail about Runes.

There are 24-bit textures that make the runes much easier to see and differentiate by color. Get them from here

Capture the Flag can be played on normal maps as long as they have flag spawn information. There are also maps built specially for Capture the Flag.
Loved maps include e2m2, e2m5, ctf5, ctf2m3, ctf2m1, ctf8, e3m6 (...) In some maps (usually episode ones), it is better to chose a given base (red or blue), as it has advantages (closer to items/easier to protect, etc) while classic ctf maps are usually mirrored (equal for red and blue).

I put together the common custom maps and locs here

With these modifications, the creation of new commands was needed. Here is a list of the most useful commands to be used while playing CTF:

The following commands are useful when you're connected to a KTX CTF server:

You can use the on_enter_ctf alias to set up ctf-specific binds when the server switches to /CTF mode. An example would be: alias on_enter_ctf "+scores; setinfo ls 23; bind q impulse 22; bind x tossrune"

If you prefer to use a script, you can bind the hook to your mouse2 (for example), by adding this to your cfg:
alias +hook "impulse 22;+attack"
alias -hook "-attack"
bind mouse2 "+hook" 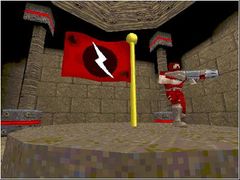 A guard protecting the flag

As a goal oriented teamplay mod, ctf brought new challenges into multiplayer gaming. In general terms, a ctf team has a flag runner, usually the fastest player. When his team is attacking the enemy base, he usually comes out from nowhere, grabs their flag and dissapears in a blink of the eye. Fully armed and armored teammies are meant to guard the base (speccially if they have a rune - the best attack is defense). Normally this kind of "strategy" is arranged before the map starts.
In terms of features, it is possible to drop the rune you're carrying for a teammate (or to get a stronger one).
Generally, your team struggles to get the enemy flag back to your base. Hence, the base must be protected against attacks from the enemy team. At the same time, your team needs to attack the enemy base to try to steal their flag.
Basic strategy includes:

Through the years there has been some tournaments.

Capture the Flag can be played with the original Threewave CTF serverside modification, but it was replaced by pureCTF, then pureCTF Pro, and finally by KTX itself.
See the KTX wiki

See a list of quakeservers.net CTF servers. However, this won't show the KTX servers that have the /ctf game mode enabled.

Other Types of CTF

The most popular one is Threewave. There are others though: