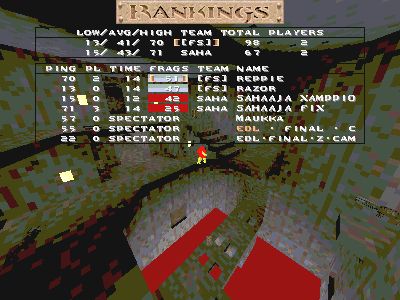 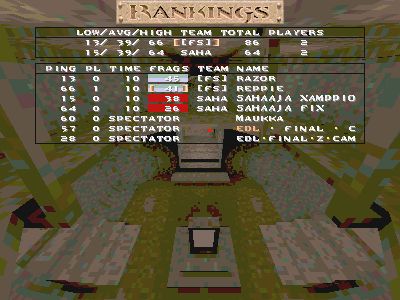 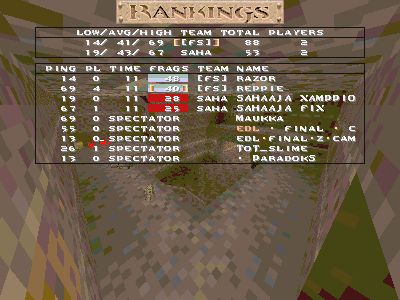 Tonight the finals of EDL was played between FS and SAHA. The game was played on Bredbandsbolaget and the teams had one LPB and one HPW, Razor and Xamp with 13ms and Reppie and Fix with 65-70ms. Fix let us know that he wasn't used to that high ping. (Whine detected)

We know both teams are very skilled in 2on2 and it guaranteed an actionpacked game.

Here follows a short summary of the game:

FS started chosing dm4 as startoff map. It was quite nice action from both teams, but FS knew what they were doing. Ok, we saw some tk's, but that's dm4...

Second map was SAHA's choice and it was dm6. SAHA had the lead until about the 4 minute mark when FS started camping(!) mega, especially xamp was annoyed by that. That was the turning point in the map and FS started spawnfragging and got into the lead. That made SAHA rush ra, and we all know what happens when you rush ra with only 100h and gl, right?

Third map was again SAHA's choice since they lost the 2nd map, this was quite interesting. I for one thought we would see dm2 as it is considered to one of the big three 2on2-maps. But SAHA chose to play on ZTNdm3, i think most of the spectators was quite surprised by that. Anyway... FS started with taking the first couple of quads and thereby getting a lead. After that Fix managed to steal a quad and killed both Razor and Reppie, that losened up the game for SAHA somewhat. But it wasn't enough to come down with a victory over FS. We also saw a nice quadbore by Reppie where he managed to broest a SAHA player and also taking down his teammate Razor.