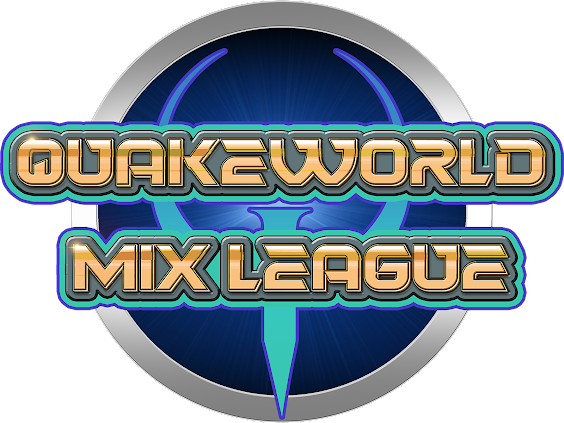 QuakeWorld MIX League is a 4on4 league for rookies and low/mid skilled 4on4 players. Players that are too good will not be allowed to play. QML is hosted by Division Ninety Nine. They have a dedicated channel on their discord called QUAKEWORLD MIX LEAGUE.

Then reconnect to the server you are on.

Players should do f_ruleset checks before game start. It is ultimately the responsibility of the players to perform this check, and in general, matches played with outlying rulesets will not be overturned if the players neglected to perform this duty. Where there is ambiguity, the decision will be decided by the Admins.

Designate someone before or after match to upload demos and screenshot. - Reporting of the match is done through the #Report-Results channel on Division Ninety Nine discord.

If for some reason you can't play a week - contact an admin immediately so we can replace you for a week ! The stand-in pool consist of late signers, that missed the deadline or people can volunteer to be placed on it. Admins will always attempt to ensure that the stand-in is suitable as a replacement

remember to always set a match tag on your game - type in consol 4on4 and QML or something. This sets a matchtag on your game, enabling the /pause feature in game

These should be the basic 4on4 settings on all modern servers, but make sure to check if you are unsure.

In short: If you are playing with the ruleset on, and you have an updated client from reliable source - you do not have to worry about if you are cheating or not and can freely explore all settings in the consol and menus.

Failure to follow these restrictions can result in the player or team receiving harsh penalties such as, but not limited to:

To download demos type in consol: on the server you were playing on:
"/cmd dlist Violet" to get a list of all games where team Violet was playing.